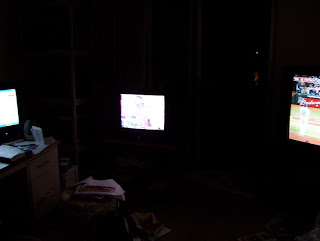 Bucs, Rays, and the internet: sometimes, picture-in picture just doesn't cut it. (The screen on the left is my computer).

Interestingly enough, I drove past the Trop just yesterday... 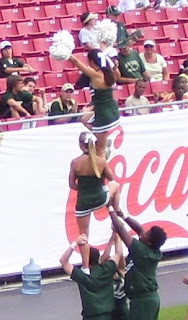 This was USF's homecoming, so the Bulls were given a mediocre team to play. The score of 45-13 was a result of that. Still though, all through the first half it was pretty close, with the score only something like 20-13 going into the halftime.

Lessons learned: leave for games early, really early. I did manage to make the kickoff, but only just barely. I would have appreciated having some time to just sit and drink beer. Also, I found it a little stressful trying to get there on time.

Second, wear sunscreen. I figured since it's October, the sun wouldn't be strong enough to give me a burn, but they don't call this the Sunshine State for nothing.

Third, get a white USF t-shirt. They make them, but like most students, mine is the more-traditional green. Those dark shirts get hot!

A few things I noticed during the game: hubba-hubba factor aside, I am pretty impressed by some of the things I've seen the cheerleaders doing. The top pic shows what I mean. Also, I'm impressed by anyone who can do a standing backflip, as I've seen most of the girls pulling off with aplomb.

Something else: I enjoy seeing the many different ways people dress up for these games. I have no idea why the guy is wearing a mask, but I gotta get some horns! Not sure if I could pull off the body-paint thing, though. 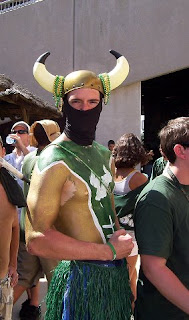 One final note: I'm betting that many people never actually go into the game. Quite a few of the tailgating setups are extravagant; the people partying at them are there when I go into the game, and still there when I leave. Perhaps they go in, but they have that comfortable air about them that says, "I like it here, and I'm not moving." I'm not sure why people tailgate to this extant, but they sure seem to enjoy it. 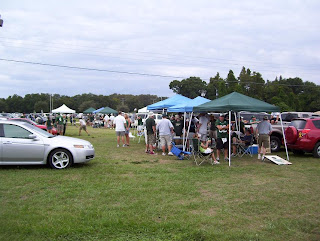 I read this book twenty years ago, back when I was still a sailor. I even remember the guy I borrowed it from; he was an Aegis tech.

I don't want to go into too much detail, as this is one of those books you might just pick up and read. Though considered intellectual enough to be taught in school, Vonnegut is also readable enough that you can take his books to the beach. I recommend this one.

One interesting tidbit though: when I originally read it, I completely missed the fact that there was a disease in the plotline. I won't go into it in detail, as I don't want to ruin it, but suffice it to say that the novel has so much going on that the disease is a minor, though important point.

When we took the quiz on this book, we answered ten questions about it. Then, the professor asked us for any interesting suggestions for extra-credit questions. I, of course, brought up this disease in an oblique way, asking what it was responsible for.

The entire class groaned. I think I was probably the only one who caught this plot-point. It is, after all, only two or three lines in the novel.

No, I'm not smarter than all those young people. I am, however, probably the only person who had read this before. Also, like spotting a bolide meteor, it was a matter of luck, and having your eyes facing the right way at the right time.

This makes me wonder what else I've missed, the first time around. For example, I had to watch "Raiders of the Lost Ark," two or three times before I realized the importance of the bad-guy's burnt hand (and the fact that they didn't have the reverse side of the gold thing).

One final thought on Vonnegut: I remember the movie "Back to School," where Rodney Dangerfield decides to attend the same college his son is attending. At one point, Rodney is using his staff from his business to do his schoolwork. The son says, "I still don't know who you're going to get to do your Kurt Vonnegut report."

A knock on the door, and Kurt Vonnegut is there, in the flesh. The funniest part is that Dangerfield's English professor flunks him on the report, saying, "I don't know who you got to write this paper, but he doesn't know the first thing about Kurt Vonnegut's work."

Higher praise for Kurt Vonnegut, I cannot imagine.
Posted by Kirk at 10:02 PM No comments:


I finished reading King Lear a few weeks ago. One scene is a torture scene, reminiscent of the one in Reservoir Dogs. This alone makes it worth reading. ;-)

But a scene that I believe to be quite relevant to modern times is the one in which King Lear asks his three daughters to tell him how much they love him. As he's getting ready to divide his kingdom into three parts, giving one part to each daughter so he can retire, you can imagine how much the daughters exaggerate their claims of love for him.

The first, Goneril, goes on quite a bit about how much she loves him, to the point of being ridiculous. The second, Regan, goes even further, topping the first.

Only Cordelia, the youngest, says something more sensible: "I love you according to my bond," meaning she loves him only as much as a daughter is supposed to love a father. She also tells him that once she gets married, he won't be the most-loved man in her life, as that title will go to her husband. (This contrasts with her sisters, who swear eternal devotion to their dad.)

Despite Lear's blustering and threats about giving her portion of the kingdom to her sisters, Cordelia sticks to her guns. As a result, he exiles her to France, and indeed gives her inheritance to Goneril and Regan.

It made me think: How many bosses punish those who refuse to praise and agree with them? I imagine that if CEO's read King Lear, they'd probably recognize themselves -- that is, of course, unless they're so filled with self-adoration that they simply don't think they have anything in common with the king.

As you can imagine, Goneril and Regan plot to kill dear old dad, while Cordelia is the only one who really loves him.
Posted by Kirk at 9:06 PM No comments: 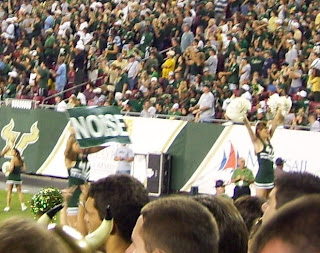 I got home from the game around 12:30am. It was a long day, but I had a lot of fun. USF lost (26-21), but oh well. It's really a blast to sit with the (other) students; those kids really make a lot of noise. I'm posting a couple of videos, but I don't think they capture the sheer volume they were cranking out.

For what it's worth, you're looking at Raymond James stadium, which is also the home of the Bucs. It has already held one Superbowl, and will host this year's as well. It's a pretty good stadium. I remember reading somewhere that the NFL considers it one of its best.