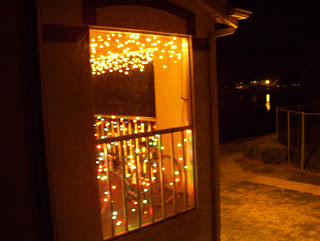 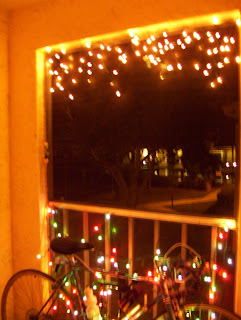 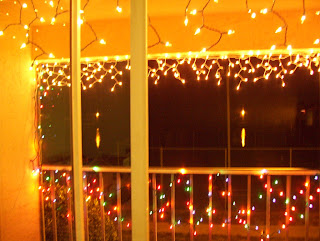 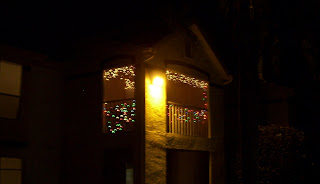 You can never have too many pics of your lights.
Posted by Kirk at 8:22 PM No comments: 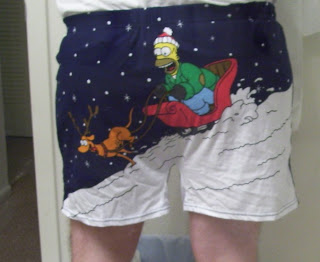 The pics speak for themselves.
Posted by Kirk at 7:59 PM No comments:

I got a B- in Shakespeare, and a B+ in Modern Lit. Rudely enough, my mother said, "A's would have been better." I just rolled my eyes when she said that.

Anyway, I get to move on to what should be my last semester. If I haven't mentioned it yet, I'll be taking Roman Empire, and a course called Editing, both of which are down here in Sarasota. (In fact, the editing course is mostly online, but meets twice, both times down here.)

I'll miss the sheer energy of the big campus. The above pic, the one with the greenery, is the area outside of Cooper Hall, where I had my Shakespeare class. It's sort of a gathering area, with protestors and such. There's nothing really similar on the Sarasota campus, just an "Einstein Begels" shop.

As for the other pic, it's looking East, from the fourth floor of the Collins parking facility, showing the dome where they play basketball and volleyball. IIRC, they call it the Sun Dome. There is also nothing similar to it in Sarasota, as there's no sports down here of any kind.

As I mentioned back in one of the first posts to this blog, I remember seeing "Little Feat" play at that dome. Even though that was probably back in '92 or so, I still remember driving onto the campus and thinking: "I wish I were smart enough to go to college." As much as I really wanted to go to school, I didn't think I'd be able to hack it.


The Winter’s Tale and Othello both show that though Eros can bring about jealousy and murder, a lover can achieve a beautiful alchemy, using remorse as the catalyst, to change Eros into the less self-centered Agape. In the end both Leontes and Othello manage to do just that.


And with that, I completed my Shakespeare paper, and the semester. That was on Monday. I mailed it to my professor up in Tampa, and that was that.

I think the paper turned out pretty well. I think the semester wound up being okay, too, with even that Modern Lit class not being too bad.

Even though I've been done with the semester since Monday, I'm still burned out. In fact, I feel much more tired now than I did when I was still in school. I'm not sure why that is. Maybe it's just because I now have the time to realize how tired I am.

I drove 3,700 miles this semester, just to attend those classes. My truck could use a break, too, along with an oil change and perhaps some new tires.

Luckily, I'll be taking next semester down here, at a campus that's maybe ten miles away. And next semester should be my last. After that, I'll have a degree!

Now, anyone want to buy some used books?
Posted by Kirk at 11:58 PM No comments: 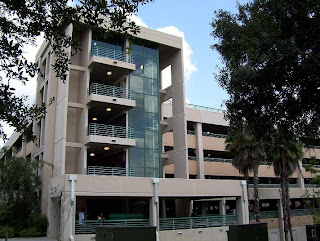 For my modern lit class, I have to turn in five separate papers this week. The papers are short, roughly only 1.5-2.5 pages long each, but still it's a lot of work. Three of them are for the book Parable of the Sower, by Octavia Butler. It's a dystopic sci-fi novel. (I enjoyed it because a lot of people get shot in it!)

I also have a 5-7 page doozy of a paper to write for the Shakespeare class. Although it's "due" tomorrow (Thurs., Dec. 4th), the prof. said she'll accept them as late as next Wednesday. Even though that will be after the end of the semester, she'll be in her office then. As I haven't even started that paper yet, I'll definitely be taking her up on that offer. (I'm planning on just sending it Fedex to her, in order to avoid the 130 mile round-trip drive up there.)

So, in short, the semester is coming to a chaotic, nerve-wracking, nail-biting end that will surely keep me up writing something late at night, maybe tonight. It happens every semester.

In other news, back on Sunday I took a header off the sidewalk in front of my apartment. A wasp flew out from a bush directly in front of me, at eye level no less. As it flew over me, I looked straight up, lost my balance, and fell back like a tree, falling between two parked cars. My head smacked into a car so hard I looked for a dent (both in the car and my head). However, the only real damage was a small cut to my elbow, which at first bled so much I thought I'd need stitches for it. It turned out just to be a small cut though, and it healed up on its own.

Pretty scary fall: I figured I'd end up in the hospital because of it.

Anyway, I gotta get back to my schoolwork. Bleah...
Posted by Kirk at 9:29 AM No comments: