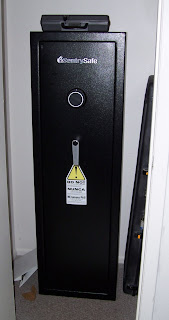 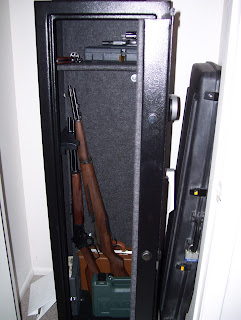 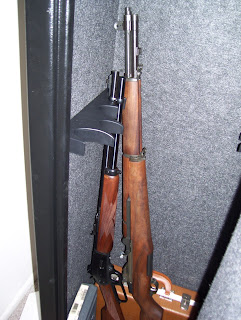 A closer-view of my World War Two era M-1. The Marlin is no slouch either; it's a .44 mag. They're both fun to shoot.

So, you can see I finally bought a gun safe. After reading up as much as I could on the subject I settled on this one, a 10-gun Sentry. At less than $300 it's what some articles on safes call an "entry-level" safe, but I figure it'll do. It was the only safe at any of the local stores that was light enough for me to get up the stairs to my apartment. Also, it's light enough I don't have to worry about it falling through the floor. (The modular, $1200 Zanotti I considered buying weighs over two and a half times as much as this one.)

Though a lot of safes now have digital locks instead of mechanical dials, I don't see the point of those. They seem to be a solution in search of a problem. This one works fine.

In other news, I did not make the trip to see the launch of STS-134. Just as well as it got scrubbed, but also there were supposedly 750,000 people in attendance. When I saw the last launch there were "only" half as many people in the area yet traffic coming back was still horrible. Unless I could possibly get a room over there for a launch I won't be going back for any more; it's just too much of a hassle.

As for why I missed the launch...in addition to having reservations about traffic and whatnot, I ended up getting some minor (outpatient) surgery done. Around five years ago I had either a horrible case of stomach flu, or maybe food poisoning. Regardless of the cause it gave me such bad stomach cramps that I actually gave myself a small muscle tear. For years I didn't notice anything except a small bump near my bellybutton. Well, it got worse so I finally went to a doctor.

I had an "umbilical hernia". Turns out that's a weak spot in the stomach muscles, and it tore. My bowels were trying to go out through the hole. So, they put a piece of mesh in there. It's about 2.5 inches across. (Now that I think about it, you can repair holes in wallboard the same way.) They did it back on April 29th. It's an outpatient thing, so I was home the same day. And after the Percocet started working, I was feeling no pain. (I stopped taking the stuff two days later. By that time the pain had diminished greatly, and I was getting a bit tired of being stoned all the time.)

Anyway,I'm out on disability until the 23rd of May. Other than the fact that I can't lift anything heavy until that time I'm fully functional, yet because my job entails heavy lifting I can't do it. Oh, well.

Until that time I'm trying to stay busy working on my novel. I'm also spending time making some ammo, though I'm limiting myself to tasks that require no lifting, like cutting already-sized cases to length and re-priming them. By the time I'm well, I should have about 200 .45 ACP cases ready to be completed. 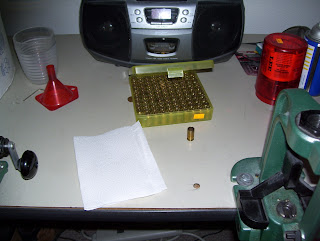 100 cases, ready to be primed. I have another 100 that need some work before they get to this point. 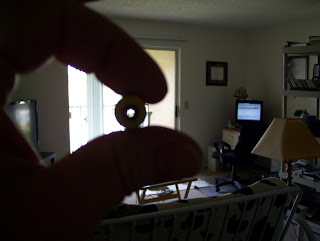 Without a primer in the pocket you can see all the way through the case. They call this the "flash hole." This will be how the primer ignites the gunpowder. Fascinating, no?

Anyway, my enemy now is boredom. I'm not used to sitting around on my butt so much. Yesterday, I drove 30 miles just to buy two pounds of coffee. With the launch of STS-134 scheduled for the 16th, maybe I will drive over there after all....
Posted by Kirk at 8:46 AM No comments: