Unbelievably, I may be able to use my little waste-of-time blog for assignment 5 in my editing class (ENC 4931). The option reads "a personal opinion blog and an inaugural 300-word essay for that blog".

As for the post itself, I'd like to write about how the federal government should stop subsidizing college for non-veterans. I've already posted twice about this, but in a roundabout way:


I expect all you regular readers to be on your best behavior!
Posted by Kirk at 12:20 PM 2 comments:

Fear and Loathing at USF 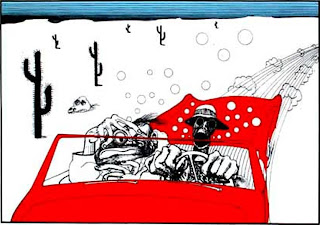 You know you're in trouble when you use an illustration from Fear and Loathing in Las Vegas for a term paper. Kidding aside though, I think the paper turned out okay. And I have to say, if you haven't read the book, you owe it to yourself to do so.

Addendum: I added some interesting factoids from the paper I wrote. Apparently, layoffs really aren't good for a company. 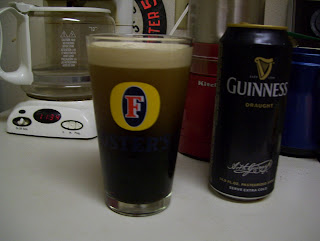 What kind of madman drinks Guinness out of a Foster's glass?


I didn't think until I was taking the picture, that I should have made a "half-and-half" type drink, with Foster's on the bottom. For those who don't know, Guinness is sometimes poured on top of lighter-colored beers. The Guinness will actually float on top of most beers, with a definite separation between the two. (It helps if you pour the Guinness over a spoon.)

After reading the list on wikipedia though, I didn't see a name for a Guinness/Foster's combo. Perhaps I get to make up a name. 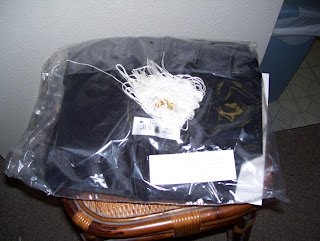 As with the past few months, this week has been a mixed bag. On a positive note, on Monday I attended an orientation for the commencement ceremony for my college. It's where I picked up my cap and gown, shown in the picture. That was kind of cool. But on a negative note, I had to take a mandatory, unpaid week-off from work. It's a corporate thing, an effort to save money. They're also stopping their "matching" contribution to our 401(k)'s, which sucks even worse, as we don't know how long that will continue.

I can pretty much smell a layoff in the air....

Anyway, for my editing course, we had to rewrite the treasury secretary's recent speech, in which he outlined the Financial Stability Plan. For those who don't know, the original speech was widely panned as being uninspiring.

Doing research for the paper, I read something disturbing: to really bail out the banks, to soak up all their toxic mortgages so they can start lending again, would cost about $7 trillion. If I'm doing the math right, that's about $23,000 for every person in the country.

To paraphrase Stalin: one dollar is a tragedy. Trillions just statistics.
Posted by Kirk at 9:03 AM No comments: