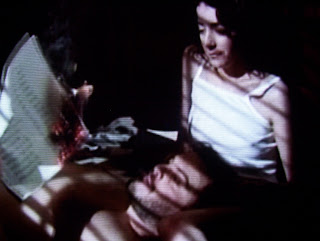 
In the movie Orange County, Jack Black's character attempts to sneak into the admissions building at Stanford, and gets caught by the girl working the front desk. Not to ruin the movie, but they end up getting naked, then burning down the building.

However, at one point, the girl says something that's stuck with me for a long time. Speaking about Stanford, she says, "It's overrated." I've always wondered: can this be applied to college in general? I'm starting to think so.

I found this John Stossel report over on the ABC news website. I'm not entirely sure how to react when I see stories like this. Unlike the New York Times story on Stefan Heise I posted on recently, I can relate to these graduates somewhat. Also, unlike the NYT story, this one explores whether college is overrated.

Although I guess I'm glad I went to college, stories like this make me think I'll be stuck at my current job for a very long time. 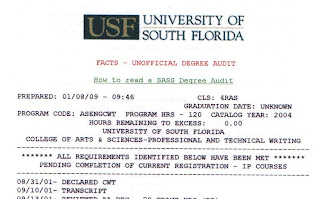 "All requirements identified below have been met..." 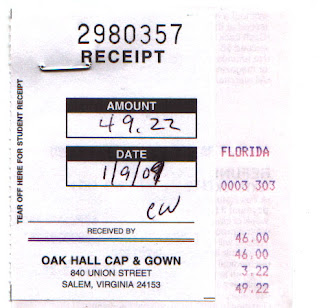 Maybe five years ago, I visited the office of the academic advisors in order to ask some questions. While in line for an appointment, a girl came in and said, "I'm here to apply for graduation." They gave her the form and she left.

I still remember how much I envied her. Well, yesterday it was my turn to see the academic advisor and say, "I'm here to apply for graduation." It was so cool.

My SASS report (top pic) now has a starred announcement that tells the advisors that I'm on my last semester. As for the cap-and-gown receipt, it's pretty obvious what that is.

I haven't worn a gown since 1985. If all goes well, I'll be wearing one again in May. Though I figure my job and my life probably won't change much after graduation, this is still so very, very, cool.
Posted by Kirk at 10:45 AM 2 comments: 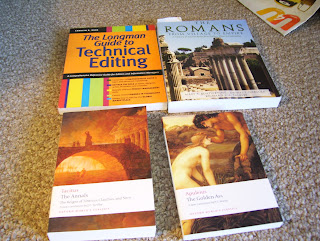 
I'm taking Editing, and Roman Empire. They're both electives, as all my required courses are done. And this should be my last semester before graduating!
Posted by Kirk at 10:40 AM 2 comments: 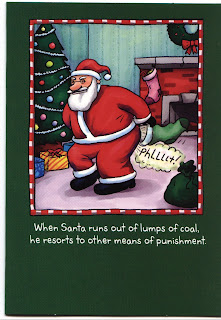 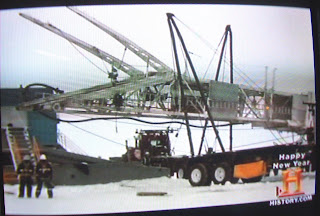 Natural-gas drilling rig. You can note the size from the two guys in the lower left of the frame. 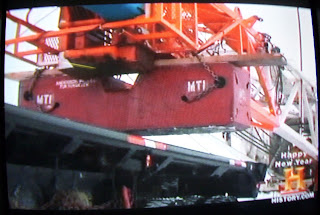 Front end of drill rig on a truck. 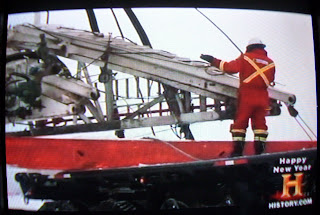 Lowering the back end onto another truck. 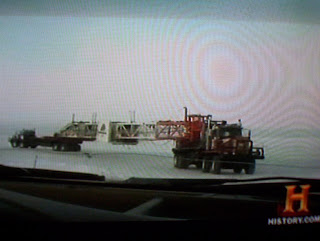 "Two-trucking" the rig. One goes backwards. 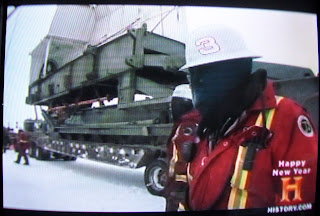 One of two bases for the drill rig. It weighs 80,000 pounds. And yes, like everything else, they drive it over the ice.


Woman checking towed radar unit. It's kept in an insulated cooler, to keep it from freezing. They use the radar to check the thickness of the ice, before running big rigs over it.

I've been meaning to do an Ice Road Truckers post ever since I started this blog. I've always liked this show.

Some people actually work for a living. Even North of the Arctic Circle, in temps that regularly get below -40F/-40C (they're the same), people are doing jobs that neither Stefan (see below post), nor anyone on the staff of the NYT would ever touch.
Posted by Kirk at 11:08 AM No comments:


Stefan's broke, but can still afford to go out for coffee.

Being just a factory worker, I've always felt like a bit of a loser. Both my brothers went to college, as did my parents, with all four graduating when in their early or mid-twenties. None of them ever worked blue-collar jobs. Meanwhile, blue-collar jobs are all I've had.

However, I'm starting to develop a changed sense about my status. I suppose it somewhat started when my former landlord threatened to go to the State Attorney's office. I had put a "stop payment" on my last rent check, and the landlord insisted that was a crime. (The place he was renting me had been in foreclosure for a year. Creditors were getting ready to finally seize it. He already had a "last month's" deposit from me. Trust me when I say he had no case.)

Anyway, despite my supposedly-lowly status as a factory worker, I had no problem sending $500 to a pretty good attorney just to threaten him back. I probably could have spent far less, as some local attorneys charge only $25 for an office consult, but I went for a firm that looks pretty professional.

My landlord, in response, attempted to argue the law with my attorney. I've seen the e-mails, and they're somewhat humorous. Apparently he couldn't even afford one of those $25 lawyers.

So, I thought it was pretty funny that I could kick the shit out of my landlord -- a guy who supposedly "owns" twelve properties. (As it turns out, four are in foreclosure.)

It was during that little incident that I discovered that some people who seem to have more status than I, are pretty much broke. A newly-discovered case in point: this 34 year-old guy, Stefan Heise, in this NYT video.

But all Stefan has, is $60k in student loans, and $20k on his credit cards. Why didn't he just take a low-status factory job, like I did?

For what it's worth, I would feel sorry for Stefan, except that he's undoubtedly turned down jobs that I've done. (Notice how the article says, "He couldn't get a job in his field." Translated, it means: "He wouldn't take a sh*t job in a factory.")

And check-out Tamara's excuse-making. Like every NYT article, no one mentions the possibility of taking a blue-collar job, or going into the military. I guess everyone in the NYT is too good for that.

However, like my landlord, they're not too good to declare bankruptcy.